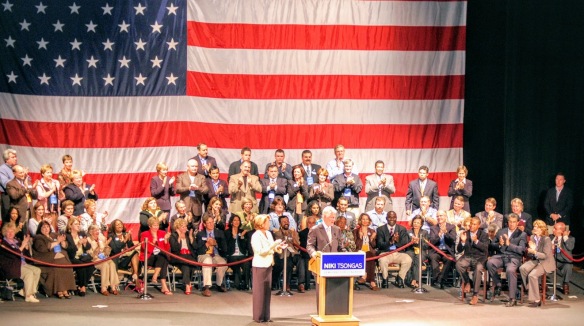 Quincy, Massachusetts is known as the City of Presidents because it is the birthplace of both the 2nd and 6th presidents of the United States (John Adams and John Quincy Adams) and John Hancock, president of the first Continental Congress, for good measure.

While Quincy certainly has earned its nickname, Lowell’s brushes with the U.S. presidency aren’t too shabby either.   Last week, we covered Abraham Lincoln‘s 1848 visit to the Mill City and some of the various other Lowellian connections the 16th president.   All told, at least 18 of the U.S. presidents have visited Lowell, including the White House’s current occupant.

The first president to visit Lowell was the first one to be elected after incorporation.  Both President Andrew Jackson and his vice president (and future president in his own right), Martin Van Buren visited Lowell on June 26-27, 1833. 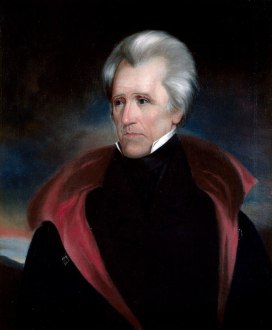 Jackson’s visit to Lowell came as part of a national tour he undertook in 1833, only the third American president to launch such an endeavor at the time.  Jackson had left Washington for New England on June 6th of that year.  His tour was covered extensively in an article by Fletcher Green published in the New England Quarterly in 1963.

Jackson had fallen ill during the tour and even skipped several scheduled stops (with Van Buren filling in for his public appearances) in Salem and Marblehead.  But the president was feeling better as he arrived in Lowell, as Green notes:

Lowell was a different story. Jackson felt fine and was intensely interested in everything he saw in the city. All the mills were closed and the working girls participated in the parade. Some five thousand, dressed in white with different colored sashes identifying them with the mills for which they worked, marched four abreast. They bore green parasols, which they waved in salute.

Jackson expressed a desire to see a mill in operation and one was opened and set going for his benefit. He was so much impressed that, according to Quincy, he talked of little else until they reached the state line the next day. Jackson later wrote that the mills filled him with admiration.

They “were perfect, nothing in the world could exceed them.”

Van Buren, of course would follow Jackson and become the second Lowell visitor to ascend to the presidency, although his only visit occurred before assuming the top office.  The next two presidents to visit Lowell however would come during their terms at 1600 Pennsylvania Avenue.

The impetus for John Tyler, the 10th president of the United States to visit Lowell was set in motion during a visit to another New England mill city, Providence.  The New England Historical Society notes that during his time in Rhode Island: “A delegation from Lowell, Mass. buttonholed Tyler and persuaded him to visit that city, as well. He traveled there after the dedication of the Bunker Hill Monument. There he learned of a new disaster brewing for his administration – his attorney general had died. The president decided to return to Washington rather than continue his tour, but his spirits were greatly improved.”

(He must not have liked his attorney general very much.) 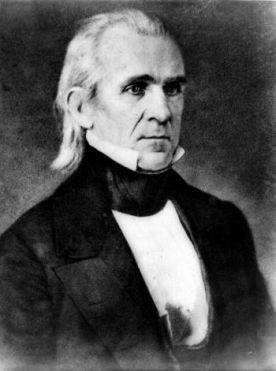 Tyler’s successor, James K. Polk‘s visit is covered extensively in this blog post on Forgotten New England.  Future president James Buchanan was part of that visit as Polk’s Secretary of State. Their visit in 1847 came just a year before Abraham Lincoln’s stop in Lowell.

The next presidential visitor came to the city in less official capacities.  Franklin Pierce, the 14th president, was a resident of nearby New Hampshire and made frequent visits to some of his relatives living in Lowell.

Ulysses S. Grant may have been the first president-elect to visit Lowell during his transition period when the union general visited the Mill City in December of 1868.

Grant’s trip to Lowell was the last presidential visit for awhile.  After six presidential visitors in the community’s first 42 years, presidential visits became less frequent.  Benjamin Harrison is said to have come to Lowell on August 15th, 1889.  William McKinley is also rumored to have visited but there are no official records of that according to the Lowell Sun’s review in 2000.

Perhaps to make up for lost time, one of the first presidential visits of the 20th century was a two-fer!

On April 29, 1912, then current president William Howard Taft and former president Theodore Roosevelt both visited Lowell on the same day, while each were campaigning for president.  (Press reports note that Roosevelt had also visited the city previously).

President Taft spoke before a crowd of 2000 people in scheduled remarks at the Lowell Opera House, while TR was set to meet with the Lowell Roosevelt committee on Middlesex Street.

Dueling visits by two presidents both running for president would probably normally seize all the headlines, but like the opening of Fenway Park a week earlier, Taft and Roosevelt’s visit shared the news day with the Titanic disaster.

TR wasn’t the only President Roosevelt to visit Lowell.  Franklin Delano Roosevelt stopped by the city on October 31st, 1932, just days before winning the presidency.

Calvin Coolidge has the unique distinction of being the first president from Massachusetts to visit Lowell.  Of course both Adamses were also from The Commonwealth but their elections predated the incorporation of Lowell as a town in 1826.  Silent Cal represented Lowell as governor and visited the city after becoming vice president in 1922.

Of course many Massachusetts-based politicians have unsuccessfully sought the presidency with strong ties to Lowell.  Benjamin Butler and Paul Tsongas are undoubtedly two of the most famous politicians to have grown up in Lowell. Butler ran for president in 1884 under the Greenback party ticket, while Tsongas won several elections in the 1992 Democratic primary race (including the first in the nation New Hampshire primary.)

There is at least one other presidential nominee that had lived in Lowell, John Kerry, who lived in Lowell during the 1970’s during an unsuccessful campaign for Congress was on the ballot for the 2004 general election.  Michael Dukakis did not live in the city, but his father did, and the 1988 Democratic nominee continues to maintain strong ties to Lowell to this day. 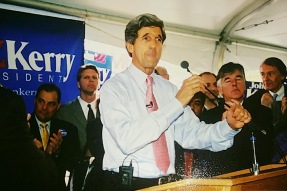 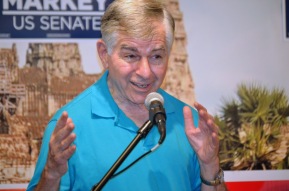 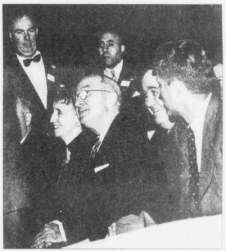 Massachusetts native son John F. Kennedy, of course, did win the presidency and possibly visited Lowell more than any other U.S. president during his time as a congressman and senator.

October 16th, 1952 marked another occasion of Lowell hosting two presidents at once as Kennedy joined the incumbent president Harry S Truman on a whistle stop train tour.  The current and future president spoke at the train depot in support of Democratic nominee, Adlai Stevenson. Stevenson would lose in the 1952 election to Dwight D. Eisenhower, who visited Lowell just a few short days later on October 21st as part of his own tour.

On September 27, 1956, then-Senator Kennedy came to the campus of Lowell Technical Institute to receive an honorary Doctor of Science in recognition of his public service and leadership.  This is one honor where his longtime rival, Richard Nixon actually beat him to the punch and got there first, as the then-Vice President received his own honorary degree from Lowell Tech on September 28, 1954.

Finally among the former presidents, Bill Clinton has come to Lowell on two occasions, once while in office and once after leaving.  His first visit, during the final year of his presidency in 2000, was for a political fundraiser at the DoubleTree Hotel in support of then-Congressman Marty Meehan. 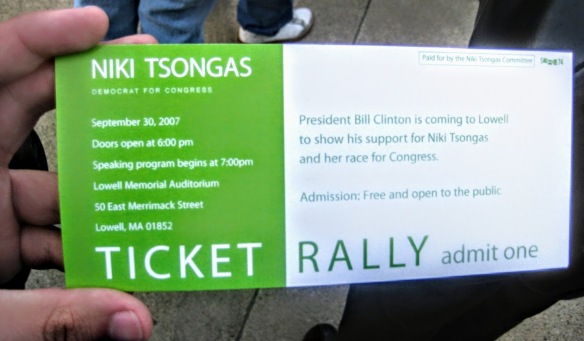 But it was as September 30th 2007 rally for Meehan’s replacement, the recently retired Congresswoman Niki Tsongas that was perhaps Clinton’s most memorable trip to the Mill City.

Clinton of course bested Niki’s husband, Paul, in the 1992 Democratic primary, but the two families got to know each other very well on the campaign trail, a topic which the 42nd president spoke glowingly about…once he got there.

As the evening wore on, Clinton’s arrival was delayed, but rather than the typical case of a politician simply running late, a more serious issue was facing event organizers.  Mechanical problems had grounded the former president’s plane.  As the Lowell Sun reported, this forced Clinton to “drive like a ‘madperson'” to get from his home in Weschester County, NY to Lowell in time to speak to the capacity crowd.

For the over 3000 assembled at the Lowell Memorial Auditorium to hear the former president speak, it was worth the wait. 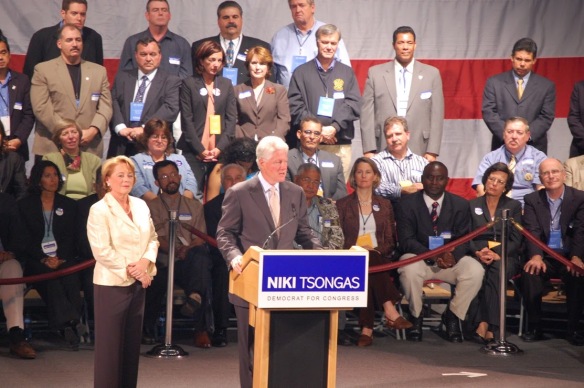 The Tsongas name adorned the building which hosted the most recent presidential visit in 2015.  But could the next president also have stops in Lowell in their personal history? 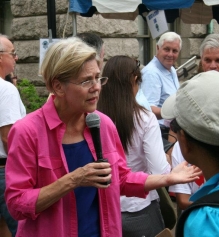 Elizabeth Warren, who made her presidential campaign announcement in nearby Lawrence earlier this month has of course visited Lowell many times as a U.S. Senator from Massachusetts.  Former Governor Deval Patrick has decided not to run, but Congressman Seth Moulton is said to be thinking about a campaign.

1 thought on “(Mill) City of Presidents”