On April 3, 1978, then-Congressman Paul Tsongas spoke on the floor of the United States House of Representatives about a jarring dichotomy.  A graduate of the Lowell Public School system, Tsongas recalled a time when Lowell’s unique history was hidden in plain sight.

“I never learned that 30 feet from my classroom lay the first power canal that the nation had seen.  Next door was the church the corporation had built for the Yankee mill girls.  Across the street was the original city hall, the first savings bank, the first primary school, a boarding house, a mill agent’s house, and a score of 19th century commercial buildings.  And everywhere we looked—the mills.”

Despite this setting, Tsongas noted, “In Lowell High School, the Industrial Revolution was something that took place in England.”

Two months later, Lowell National Historical Park was officially established. The journey that culminated in the halls of the United States Capitol building began with a group of teachers and community leaders in Lowell’s Acre neighborhood who had an idea to revitalize their hometown.  Lowell would become an Educative City.

“I got involved with the group to help the kids in the Acre with education,” recalled Peter Stamas in a 2002 interview with the Boston Globe.  Lowell had struggled in the years following World War II. The Acre was among the neighborhoods hit the hardest by deindustrialization and was identified by local leaders as an area that could benefit from investment through the Model Cities program of the federal office of Housing and Urban Development. In February 1970, the Lowell Model Cities program began with seven major components; Recreation & Culture, Health & Social Services, Housing, Urban Design, Crime, Employment, and Education.

Stamas, an Acre native himself, was the assistant director of the Model Cities Education component. The strategically minded and meticulously organized Stamas served as a perfect complement to the component’s radical visionary director, Dr. Patrick J. Mogan.

Bust of Patrick Mogan at the Mogan Cultural Center in Downtown Lowell.

The term “Educative City” originated in academic circles and was introduced to Lowell by planner and researcher Michael Southworth, an MIT doctoral student at the time. But it was Patrick Mogan who ultimately embodied the concept throughout his varied career in the City of Lowell. During his time leading the educational component of the Model Cities he was tasked with creating an innovative approach to learning that could overcome what was seen as prevalent negative self-image of the city.  The inspiration for that approach came from Mogan’s own experience as the son of Irish immigrants growing up in Norwood, Mass.

Mogan estimated that only 20 percent of a student’s development took place in the traditional school setting. The remaining 80 percent of learning took part outside the classroom.  That experience could be positive or negative, but it could never be neutral.  The Model Cities Education component used that understanding to re-envision Lowell as a citywide learning laboratory, a classroom without walls, the everywhere school—The Educative City.

Michael Southworth and his wife Susan worked closely with the Model Cities Education component on drafting plans for the Lowell Discovery Network, an early blueprint for Lowell’s “urban cultural park.” 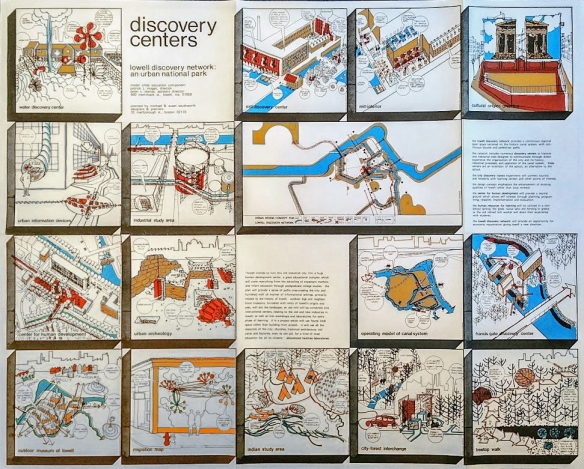 Many of the elements of the Lowell Discovery Network were eventually incorporated into Lowell National Historical Park, while others remained unrealized.  A particular difference between the two visions was the earlier plan’s incorporation of the Lowell-Dracut-Tyngsboro State Forest as a center for environmental study.  Despite the “park” element of the plans, the focus was on education rather than recreation—and utilizing lifelong educational opportunities as the avenue for local economic development. 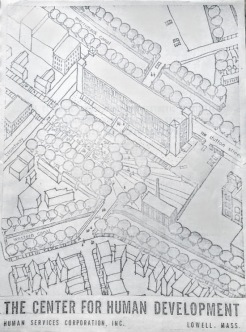 One of the most ambitious pieces of the plan was the Center for Human Development. It was readily apparent at the time that no single agency would be able to oversee or implement the transformative change that Mogan and his team envisioned. The Center for Human Development was described as a facility that would “provide a neutral ground which allows self-renewal through planning, programming, research, implementation and evaluation.”  The vision for the project involved stakeholders from education, health, mental health, housing, and other human services areas working together under one roof.  The center concept was approved by the Commonwealth of Massachusetts as an experimental school, a location was chosen (the former “Giant” department store on Dutton St.), and plans were well underway when state funding for the project was pulled.  Ultimately, the Human Services Corporation, which had been established in 1971 as a nonprofit organization to continue the work of Model Cities, fulfilled some of these roles.

Despite the success of the National Park effort, Mogan still sought a more complete fulfillment of the Educative City idea.  As Marion describes in Mill Power, even though he was known as the Father of the Park, Mogan viewed the parks as “means—not ends in themselves—for achieving the stated goals.” 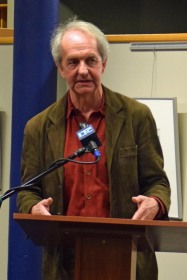 The spirit of Mogan’s Educative City is being revived in a new effort spearheaded by Professor John Wooding of UMass Lowell. This April, Downtown Lowell will play host to a pilot Festival of Learning, highlighting the many educational opportunities offered by Lowell’s institutions. Today, Lowell is home to a leading researching university, a community college, a National Historical Park, and many community-minded nonprofit organizations with an education focus. Rather than a large investment in bringing in something from outside, the festival will highlight the dynamic resources already in Lowell.

Mayor William Samaras expressed excitement over the festival.  “Pat Mogan always believed the key to success was taking something that works and bringing it to the next level.  As someone who was mentored by Pat Mogan, I am very proud of Dr. Wooding’s efforts.  This truly is going back to the Educative City concept and taking it to the next level.”

Professor Wooding will be presenting this new endeavor to the Lowell City Council’s Education subcommittee on February 27th.  Wooding hopes that Lowell will be first American community to join UNESCO’s Global Network of Learning Cities.  There are currently 195 Learning Cities in 47 countries including Cork, Ireland which hosted the 2017 International Conference on Learning Cities.  More details on this exciting new initiative will be shared in this space over the months to come.